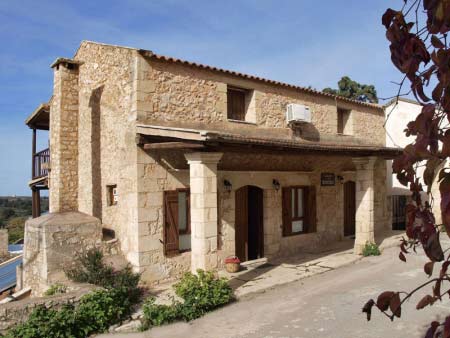 Building of 1860, in the past functioning as a small Inn for the farmers of mountain villages that came to Vamos to sell their products. In the entrance of the houses you can still see the shelterer where they used to put their horses. The house has been renovated in 1996, and it maintains a lot of its old elements. It consists of two houses that can accommodate from 2 to 4 persons. 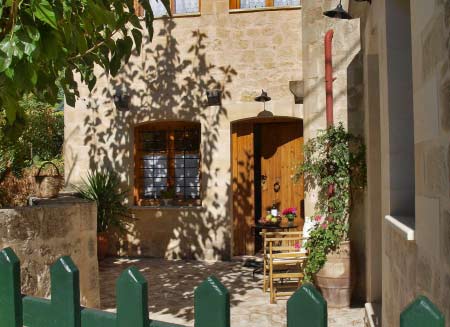 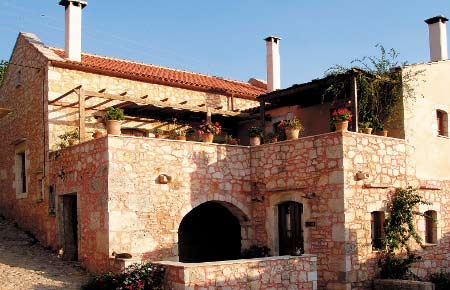 Building of 1840, owned by Nikolas Franteskakis. Partly it was a cafe shop till 1936, and later a grocery, while the main part was an old olive oil factory that functioned till 1946. The building has been renovated in 2001, and it takes the name Fabrica from the old olive oil factory, which is preserved till now. It consists of three houses that can accommodate from 2 to 4 persons. 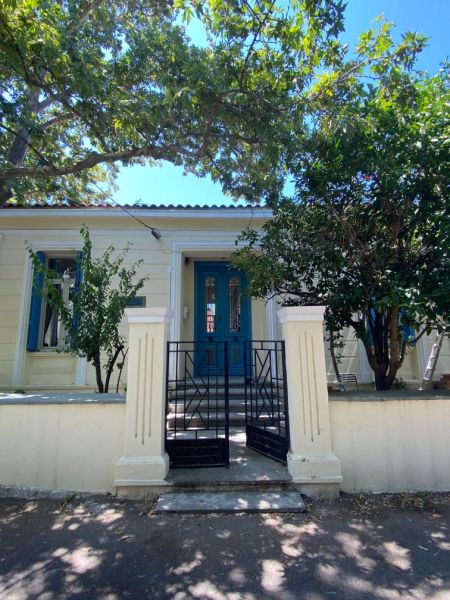 Yioklima (Honeysuckle) House is a prime example of the neoclassical style of architecture prevalent in Greece from the turn of the last century until the 1940s. Situated in the old neighborhood of Vamos, it forms part of a unique collection of buildings, shaded by a huge plane tree. Built in the 1920, with its long history of Flemetakis family, its ceramic floors and high ceilings, the balcony with the strategic view of the village, it will travel you to the past. Max 4 persons . 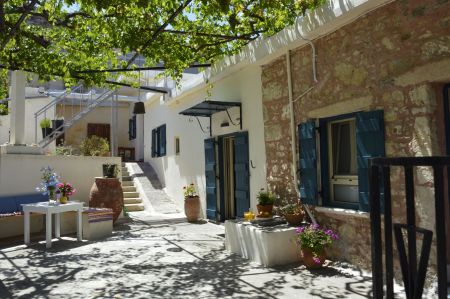 Hasomeri is located in the heart of the old settlement of Vamos.The oldest part of the houses have a long history since most of it was burnt down in the battle of Vamos between Turks and Cretans in 1896. It was rebuilt during the union of Crete with Greece in 1913 with the seasons standards, main rooms in order with an outdoor bathroom, a small garden for the vegetables of the family who owned it, Goniotakis. Anna Hadjidaki bought the house on 2007, and in 2013, Hasomeri music and local delicacies space was created by her brother Giorgos, and hosted multiple music nights with artists highly appreciated, and surprisingly seen in our village! He named it Hasomeri, meaning “a space for a creative waste of time”.. On 2020, Anna began the renovations that transformed Hasomeri to the cozy and home-feel like guest houses 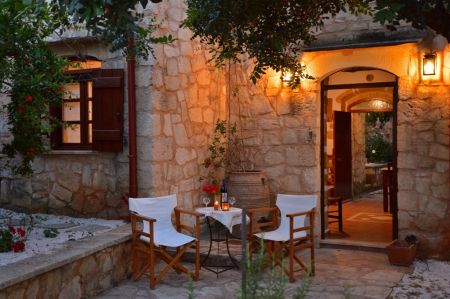 Traditional Stone villa with two levels. Built in 1887, the villa was totally restored by its current owners in 1997 using only natural materials such as wood and stone, keeping up with the traditional style of the rest of the village. Accommodates max 3 persons. 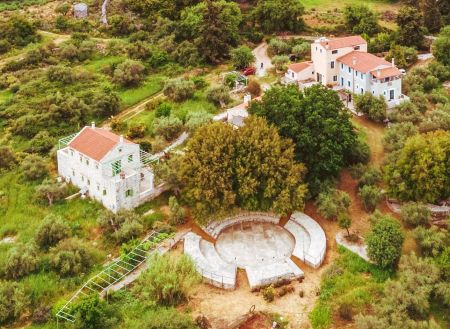 The Frantzeskakis family welcomes you with arms wide open in “Fabrica Farm”! Here you will get to know the everyday life of the locals and you will be a part of it! Welcome to the family's organic olive grove, with fruit trees and vegetables, birds and farm animals, flowers and herbs, where smells and colors recall another era. You may enjoy the tranquility and peacefulness while sitting at the Romantic Corner or lying in a hammock. Listen carefully to what the old olive trees have to say… It can accomodate up to 4 persons. 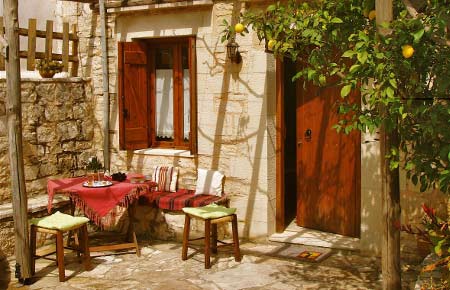 A unique restored house with its own beautiful garden where you will also enjoy the homemade Cretan sweets of the owner, Mrs Argiro. The house has two levels, has a veranda with view of the White Mountains and a very nice garden. Accommodates max 5 persons. 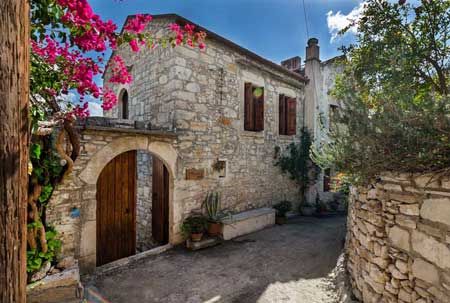 A renovation with spirit, attention and love. The house dates from 1863 and Filippas, the grandchild of the family who inherited the building, has put his own work in the renovation in order to maintain its original character. Black and white photos, carpets, treasure chest and other items of the family, are now decorating the house, each of them telling a story of the past. The welcoming yard on the entrance and the balcony with the amazing viewover the hills, make this house a cosy shelter that you will adore. Accommodates max 4 persons. 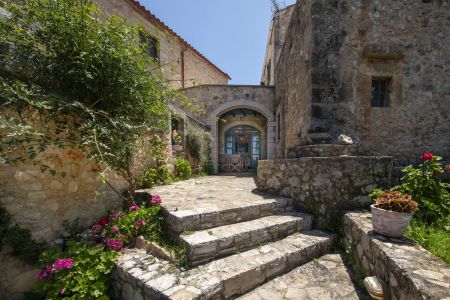 A building that dates back to the 1860’s. Back at the time it used to be the home of the Kekakis family while it was the birth place of the present owner’s grandmother. It had only one floor housing the whole family and the animals in the exterior. The space that now is mezzanine used to be a “fournospito” meaning the cook house, an oven made out of broken earthenware jugs, while the holes on the wall served as aeration system. The house was renovated in 2004 with respect its past. You can still see a lot of elements of the house dating more than 150 years back, like the arch in the entrance and the peculiar cistern in the exterior of the house. The paintings that decorate the walls are made by the owner. It can accommodate from 2 to 5 persons.
Read more... 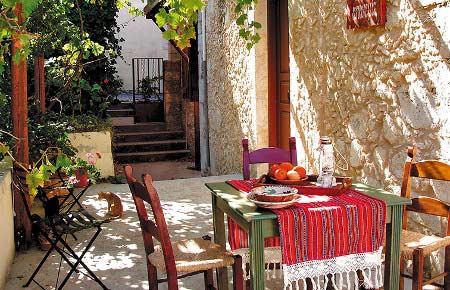 A house with character since 1840. Its renovation has the same lay out like the old house, rustic decoration with antic furniture. Accommodate from 4 to 7 persons. 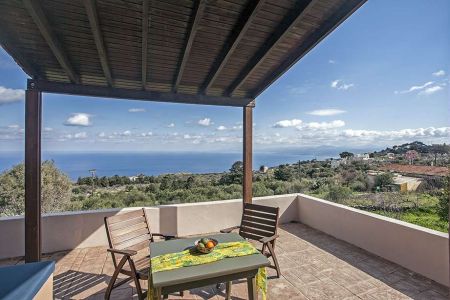 Blue Horizon house stands proudly on the top hills of Kefalas village, gazing at the sea view and the White Mountains view. Newly built, cozy and spacious offers a comfortable and relaxing vacation for a small family or a romantic getaway for two. Simple design, with a veranda looking at the open Cretan sea, courtyard shaded by the classic vine tree and privacy. Accommodates max 4 persons. 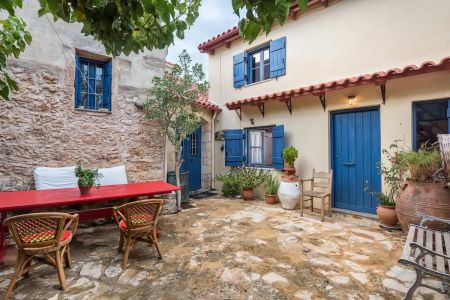 Villa Ekati is a renovated old stone house, in an idyllic setting in the middle of the hills of Apokoronas, in the village of Xirosterni. The house was built around 1800 and has all the elements of a traditional Cretan house. The Papadaki family chose to create a real refuge for artists, being an artistic family themselves. This holiday home welcomes you in a bohemian and country atmosphere for a relaxing holiday. We invite you to explore the beauty of the environment, create new memories and take advantage of the uniqueness of its energy. Hekate’s House is a paradise that does not exist anywhere else: your vacation in Crete, with absolute comfort in the heart of nature. It can accomodate up to 9 persons.

Read more...
back to top